Hi Friends! So today I'm sharing a project I made for my work Buddies. With COVID-19 all around us we're down to just 12 essential staff. We usually have 75! It's been 2 weeks now with this small crew and I wanted to make a little giftie for them. I made soap paper! Perfect for what's going on in the world right now! 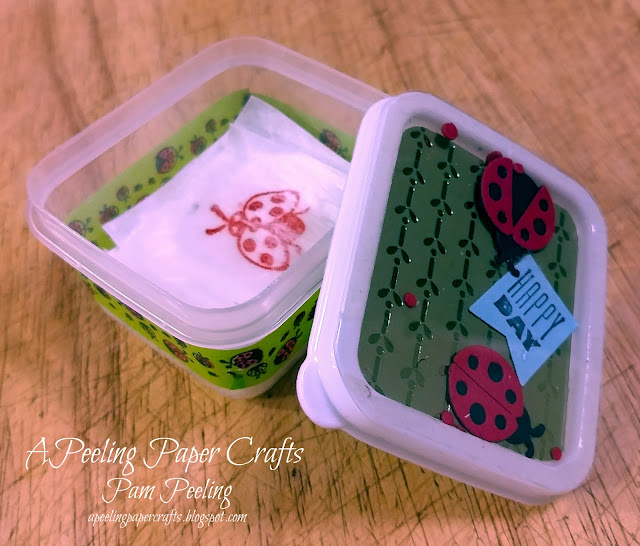 Let me start by saying, yes, they turned out cute and yes, I finished the project and gave them to my friends, BUT OMG, THIS PROJECT WAS A DISASTER RIGHT FROM THE START!!! In my head I had this beautiful little plan to make perfect little squares of delicate nice smelling soap paper. I was going to color the soap, or decorate it in some way, use multiple scents...Uh Huh. By the end I was so done with the concept and lucky to even finish it! 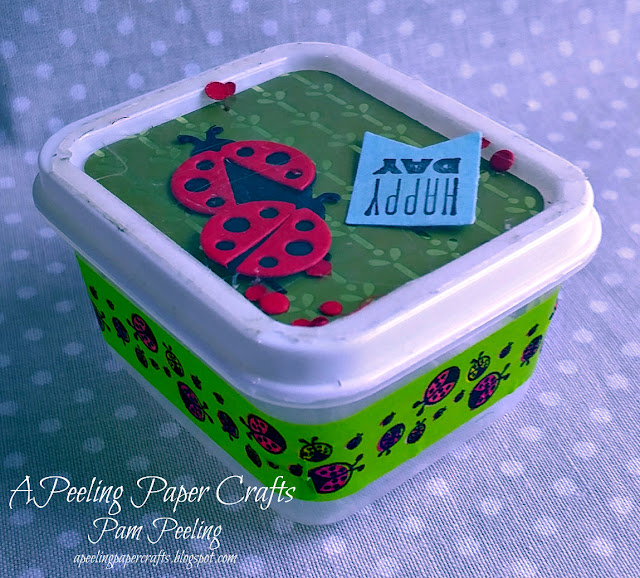 The little containers were no problem and I love how they turned out. 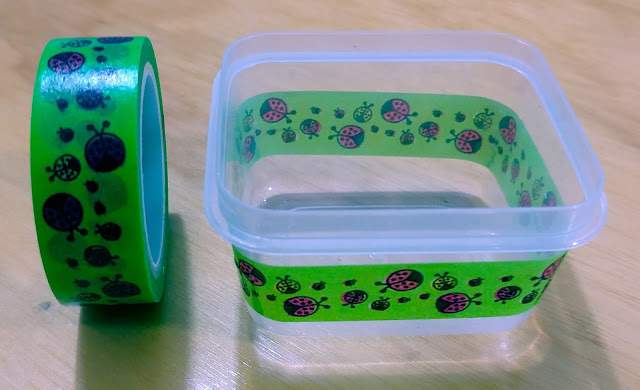 I had these little plastic containers in my stash, I think I got them at the dollar store a long time ago. I used some washi tape from my stash and put it around each container. 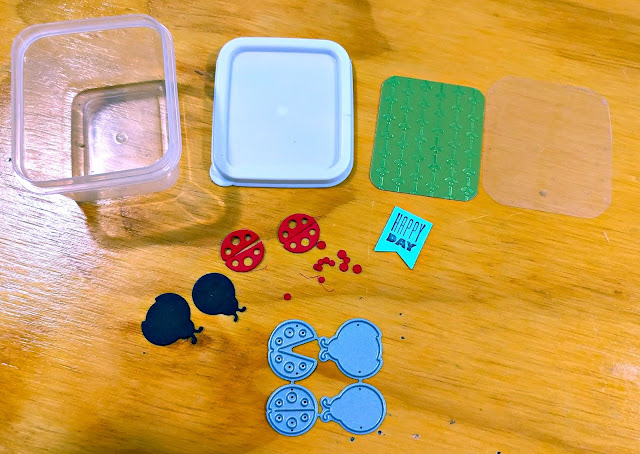 The tops have a raised edge and so I decided to make them into a little shaker. I used some foiled paper from Stampin Up! and cut it to the size of the lid. Then I die cut the little lady bugs with a die from my stash. I decided to add the little red dots too because it added more shaky elements :) I used a small banner punch to cut the "Happy Day" sentiment. I cut a piece of plastic window sheet the size of the lid. 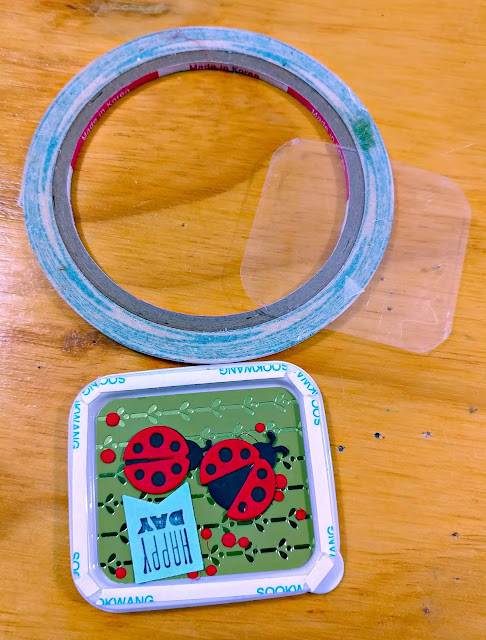 I put everything onto the top of the lid then ran 1/8" Scor-Tape around the edge and adhered the  window sheet. 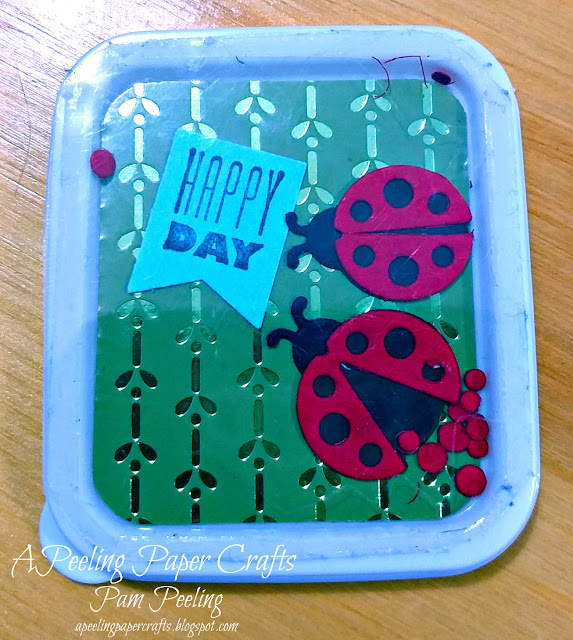 So cute! I loved how they turned out!

The soap paper itself though?! What a pain in my @#$!!! I first saw this on Pinterest and I watched a couple of videos and read some tutorials. It looked so easy. The basic instructions is to brush liquid soap onto water soluble paper coating both sides. Hang to dry, then cut into squares. Sounds simple enough. LIES!! ALL LIES!!!

I thought it was a perfect idea for work and everybody would be impressed blah blah blah. I was so excited and ordered the supplies on Amazon-it came in like 2 days! The videos I saw used liquid soap. I had some but it was more of a gel texture, and with this virus I really wanted to avoid the store. I decided to buy a block of cocoa butter soap thinking I would just melt it and it would be liquid and work the same. NOPE. 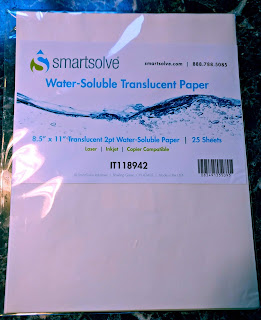 Now before I get to the soap debacle, let's talk about the water soluble paper. I ordered Smartsolve brand.

It's pretty thin and translucent. VERY delicate. I thought it would be really cute to stamp some images and sentiments on the paper before I brushed the soap on. That actually worked just fine. I stamped 2 sheets to start.

I cut a chunk off the 2 lb block of soap I bought and cubed it up. I added a few drops of Lemon essential oil for scent. I don't own a double boiler so decided to use a pyrex measuring cup and microwave the soap. That worked pretty good, it melted very quickly. 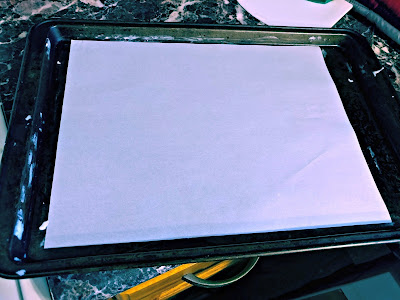 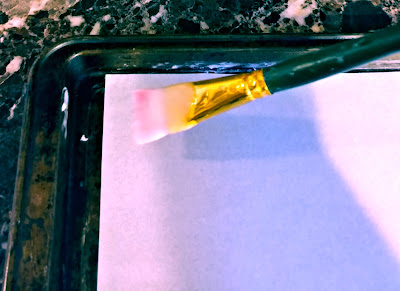 I used a small paintbrush and started to brush the soap onto the paper. This is where things started to go wrong. The soap cooled so fast, that it was going on too thick. The brush seized up with soap very fast and wouldn't spread evenly. In the videos the paper was thin and flexible- that's what I wanted. Not what I was getting! I decided to try the double boiler method. I figured it would keep the soap warmer and liquid longer. I rigged 2 saucepans to work as a double boiler. All good. I put the soap into the smaller pan. It took forever to melt! The water was boiling and it finally started to melt but the top kept getting too cool and creating a skim of harder soap. UGH. I was getting frustrated by this point. I'd worked all day and was tired, my feet hurt and this was not going well. I almost gave up, but decided to take a break. I was determined the make this work! 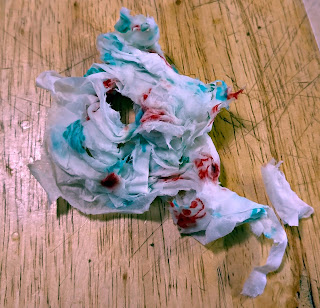 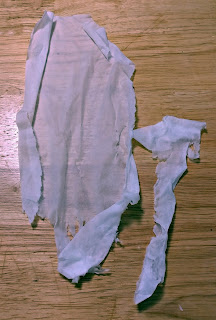 I decided to try the liquid soap I had on hand. Bad idea! I brushed it on one side and tried to flip it over to coat the other side. The paper was so delicate and broke all apart! I have no idea what I did different from the videos but it did not work for me! I thought, maybe the slightly gel texture was too rough on the paper, so I thinned it out a little with water. OMG what a mess. The paper broke apart even more! It ended up in a slimy lump of grossness. And wasted one of my stamped sheets :(

By this point my kitchen was a mess, I was so frustrated and ready to quit again! But I so wanted this to work! I took another break and just accepted that the sheets weren't going to be exactly like I first wanted. I went back to it. 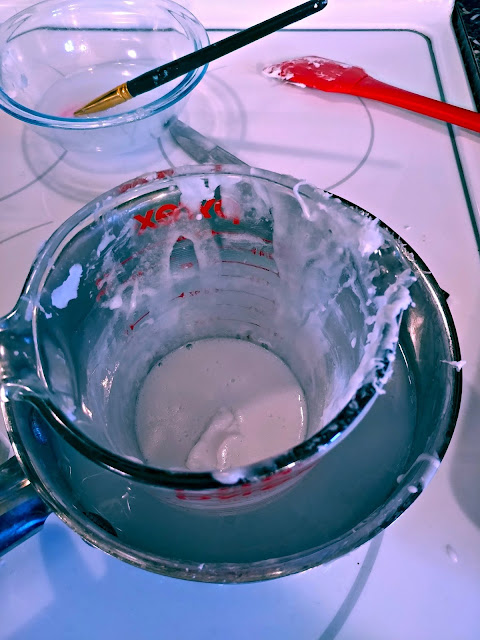 I decided to alter the soap a bit...I dumped in the rest of the thinned out liquid soap and added a little bit more water. I microwaved the soap to melt it and then put the measuring cup in the hot water from the double boiler. It was still pretty hot. This worked very well actually. 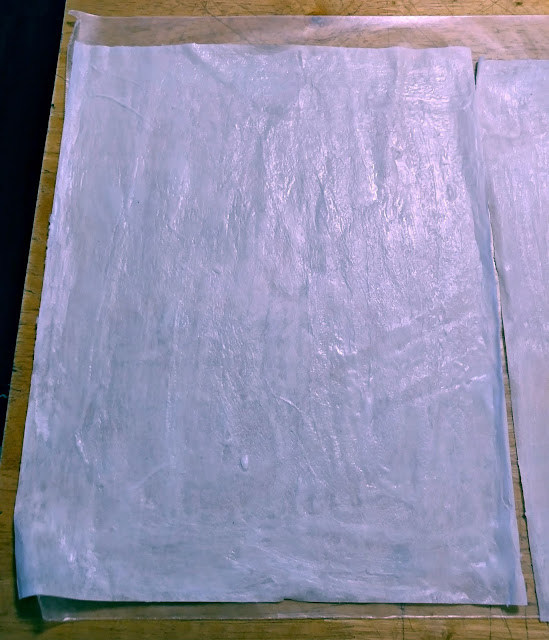 By this time I was over the creative aspect and didn't stamp anything on the paper. Plain white soap onto plain white paper. DONE! They came out thicker than I wanted but like I said, I was over it by then. I just went with it.

I planned to use an exacto knife and cut up the soap paper. Ugh...again Nope. The paper was soft due to the soap and even a brand new blade didn't cut cleanly. It just pushed the paper in front of it and tore it. Gggrrrr. I created a grid with the size of the soaps I wanted and used scissors to cut the sheets. 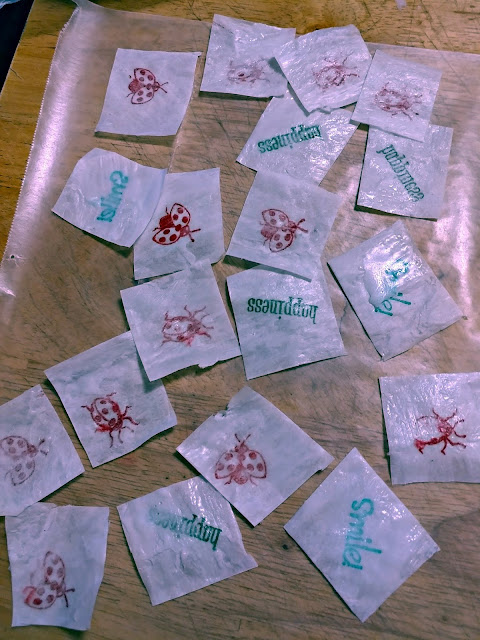 The stamped sheet actually came out really cute. I had enough to put just a couple in each container. 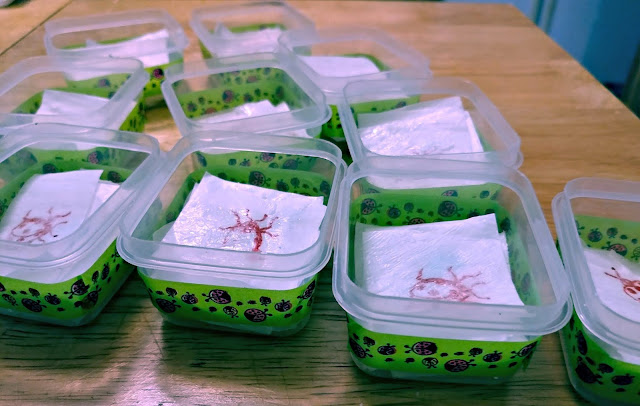 Even though this project was a bit of a fiasco and I was ready to quit a few times, I persevered and completed the soap paper. I'm not sure I would do this again but I'm very glad I finished!
My friends liked the little giftie and had no idea all the trouble I had 😊

At least at the end of this project my hands were soooo clean!😉

Have a great day!
Pam
Posted by APeeling Papercrafts at 7:29 PM

Thank you so much for your comments. It's great to hear from you! 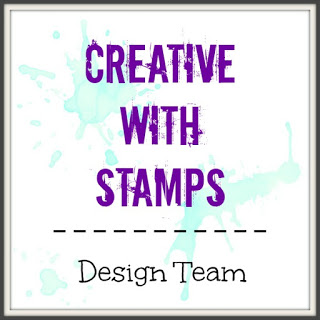 Check out my Gallery!

Promote Your Page Too 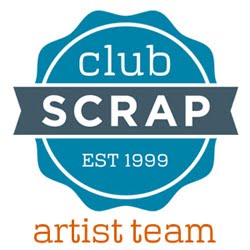